With those words, Irv Weinstein began the late-night newscast on Buffalo’s WKBW Channel 7. He was the big time, the Walter Cronkite for our generation. He left the airwaves 17 years ago but just his name conjurs up memories of mentions of Tonawanda, Lackawana and other exotic locales he brought to our little southern Ontario ears.

Weinstein is 86 and was recently diagnosed with ALS; Lou Gehrig’s Disease. He and his wife live in California now, but back in the 1970s and 80s he led a ratings powerhouse newscasts in Buffalo. Eyewitness News with Irv at the helm had style, substance and was famous for stories full of alliterations. His stories reached out from the TV screen and pulled you in. He was likely the most popular TV personality in Buffalo history where he’s still known as simply, Irv. He was on the air from 1964-1998, an incredible run. 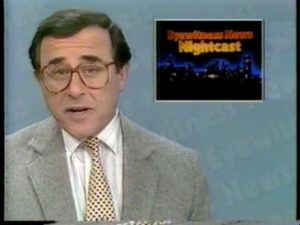 Weinstein has an optimistic outlook, despite the obvious implications of the diagnosis. In recent interviews, he’s expressed thanks to the wonderful people of Buffalo and is grateful for the 34 years he spent giving them their news. Channel 7 started a legendary ratings slide in the years after Irv left and it has never recovered. To everything there is a season, I suppose, even iconic broadcasters like Irv.