I’m writing another decor-related series for newspapers but to be honest, I’m not even sure where it’s being published! It’s original filler for a huge chain of small publications. It might appear in Sault Ste Marie one week and in Coburg the next. It centres on DIY craft projects for the home. I’m always happier when I have some sort of creation in the works. It also makes me feels good to repurpose stuff that would normally land at the curb. 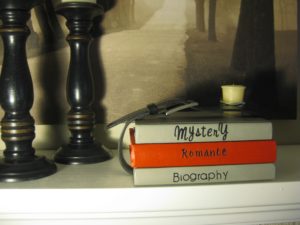 This one’s for a book-lover. It’s made of three hard-cover books; two out-dated marketing texts that pre-date social media, and a decade-old John Grisham novel that used book stores can’t get rid of. A little chalk paint, glue and some stencils along with an old leather belt to bind it and – voila! Something to put a candle on or use as a little bit of interest between books on a bookshelf.

I’m making coasters out of CDs and photographs, making cheap, plain candles look higher-end with some stripes and other decorations, and utilizing some of my older crafts. I’m even repurposing my repurposing projects! If you have any ideas for projects you don’t mind sharing, I’d love to know about them. They’re not all created equal. One of my striped candles got all smudgy and I made the mistake of holding it by the wick, which promptly slid right out. Hey, even Martha Stewart drops an egg on the floor once in a while.