This debut novel came to me in an unusual way. The author, Holly Ducarte, is the sister of a former radio station colleague. It’s classified as YA – Young Adult fiction, but this older adult truly enjoyed it.

The Light Over Broken Tide is the story of Rebecca, a teen whose mother has just died. Her father – essentially a stranger – shows up to take over as her parent. He forces her to move, and imposes rules she’s not used to. Her life is upended all over again before she’s had a chance to heal. She “sees” her Mother and Ducarte takes us on a ride to discover whether Rebecca has some sort of rare ability or she’s in the throes of a mental breakdown.

Meantime, Rebecca falls hard for the first boy she meets in her new town and they experience the overwhelming kind of teenage love that’s suddenly everything. The adults conspire to keep them apart but, well, you know teenagers. 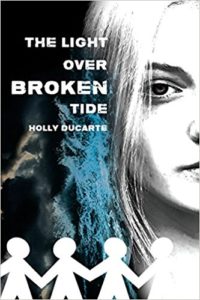 I’m a student of writing and can’t help but appreciate a beautifully constructed sentence. I’m also taken out of the story by a poor one. But Ducarte expertly rides the line between breezy and deep. I don’t have a lot of time to read for pleasure but I stayed up late for a few nights in a row because I couldn’t wait to find out what happened next. That’s the mark of a great story. I hope Ducarte writes more of them.