According to New York financial services expert Jack Kelly, they’ve all been fired. Not all, of course, but enough to call it a trend. Kelly calls it the new discrimination that we don’t talk about.

My late, former father-in-law Ellis told me about his experience as an older worker in the grocery sector. When Ell was about forty a new, young manager was hired and deemed Ell too old for the job. He demoted Ell to overnights, stocking shelves. It was discouraging and humiliating but he hung in there. There was no HR department to consult, no union to file a grievance with and he had a family to support. He sucked it up until he could get out, which was what the manager’s goal was all along.

In broadcasting, and likely in other industries, there are unwritten rules about when you’re at the biggest risk for getting a pink slip. There’s the 20-40-60 rule. If you’ve been with the company more than twenty years, are over forty years old and make more than 60k, you’re at risk. I thought of this last month when I posted a photo of my 36-year certificate from the Ontario Association of Broadcasters. Did I really want to tell the world that I’ve been in the business that long? However, authenticity and truth are my watchwords. A little self-deprecation never hurts. 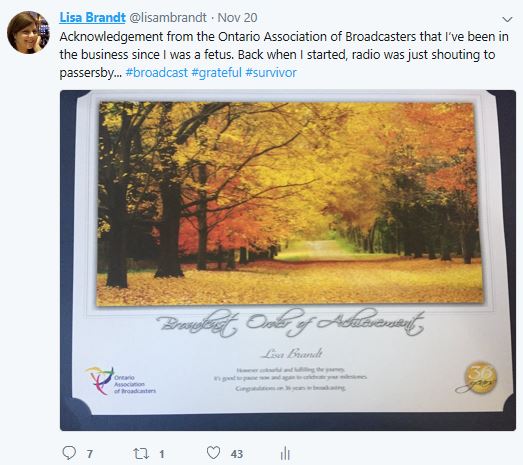 I believe Kelly is correct in his argument that companies sacrifice wisdom for what they believe are fresh-faced newcomers who have more energy and drive, and will work for far less money. Who will mentor them? Who will show them the ropes? My peers and I can get tons of work done because of the expertise we have in doing it. We’re faster from experience. First-time employees take time to grow into the job. There ought to be room for all of us. Kelly’s post on Linked In is HERE. Let me (and him) know if your industry is also part of this trend.

1 thought on “Where are the Older People at Work?”