It’s quite alright to come in second. Don’t worry – I realize, fully and completely, that I’m not in second place in the radio industry. Many people are more successful than me. But I always come second to Erin Davis and that’s quite alright with me. You don’t hear Gayle King complaining that Oprah is more successful than her. Gayle co-anchors CBS This Morning and that’s a pretty darn good gig. Friends are proud of what other friends accomplish. It’s not a competition. And if it is, then you’re not a true friend. 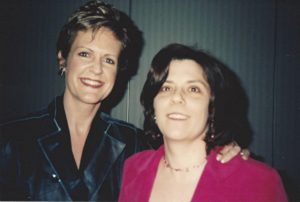 This is us in 2003. And tomorrow, she and hubby Rob will arrive for the weekend and I’m so excited, I might need those pee pants whose ads are following me around the Internet!

2 thoughts on “Thankful Thursday – My Oprah”